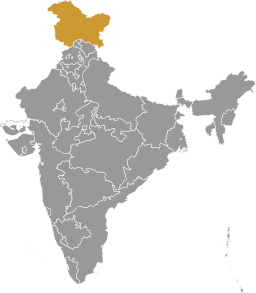 In the north-west of India, between the earth’s highest mountain ranges, the Karakoram and the Himalaya, Ladakh extends along the valleys of the Indus and its main tributaries. One of these, the Zanskar River flows from south to north and gives its name to the region. Zanskar covers an area about the size of an English county (2,700 square miles, a little larger than Lancashire). The population is about 15,000 and the capital is Padum which resembles a large village.

The gorges carved out by the river are a geologist’s paradise! The walls cut into the heart of the Himalaya reveal layer upon layer of geologic strata : pink, grey, green, blue and black, folded, compressed and contorted. This magnificent scenery is best viewed in winter from the frozen bed of the gorge, which takes on the name of Chadar, "the Enchanted Route" at this time.

Upstream of the gorge the valley is bordered by high arid mountains rising to 6,000m and forms a vast plain where the river makes numerous meanders. On the edges of the plain, where adjacent valleys debouch, lie the villages of Pishu, Zangla, Stongde and Karsha. The high Himalayan barrier prevents the monsoon from reaching Zanskar, and thus the climate is extremely severe : harsh cold in winter and very dry in summer. The altitude makes agriculture difficult, but thanks to the irrigation derived from the fast-flowing rivers the people are able to cultivate barley, the staple crop essential for their survival.

Here and in the tributary valleys are the monasteries of Karsha, Stongde, Sani and Phuktal, and the nunneries of Pishu, Zangla, Karsha and Tungri, all reflecting the living Buddhist tradition. Far more than a religion or a philosophy, here it is a complete way of life that governs all aspects of the daily round. Padum, the commercial centre of Zanskar, has grown as a result of tourism, and has a small Muslim population.

To the southeast of Padum a route follows the valley of the river Tsarap (one of the two main feeders of the Zanskar river) and leads eventually, in 6 to 8 days, via Darcha in Lahul to the road to Manali. To the west of Padum the road follows the valley of the river Doda over the Pense-La (4400m) to Kargil. This only road link between Zanskar and the outside world is a 10-12 hour journey on a rough and airy road. It is closed from the first snows of winter in November, and then Zanskar is completely cut off until mid-January when the frozen river allows the Zanskarpa to make the arduous 2 to 3 days journey to Leh.